In the Studio now

And another year goes by.  And quite a year it's been and continues to be.  But this isn't the place for that. It's early June 2020. I was lucky enough to work with Mark Burnett of Leominster MA on a monument to another Rutland VT native son, Martin Henry Freeman, born in Rutland in 1827. First black graduate of Middlebury College, first black college professor in the US at the Allegheny Institute (later known as Avery College) near Pittsburgh, and later professor and president of Liberia College, now the University of Liberia.  Below is the only known photo of MHF, the piece in process with Mark's model behind, and the nearly finished piece  This  is also for the Rutland Marble Trail, and will be installed in the Center St Marketplace as soon as travel and gathering restrictions will allow.  Marble is Danby Florentine.
It's May 2019, and the Relief sculpture of the 54th Regiment was finally installed with an unveiling and dedication planned for Friday May 17th at noon. Many thanks to excellent stone mason Kevin Sweet (pictured) for making the installation go smoothly, along with Carving Studio manger Tom Kearns, and Dave and Charlie who brought the big equipment from Green Mountain Power.  Also still in process here  in the studio is a black granite cemetery memorial, of which I will only show the top carving and a few details for the privacy of the client.  The photo shown will be laser etched and the spoon set into the stone. 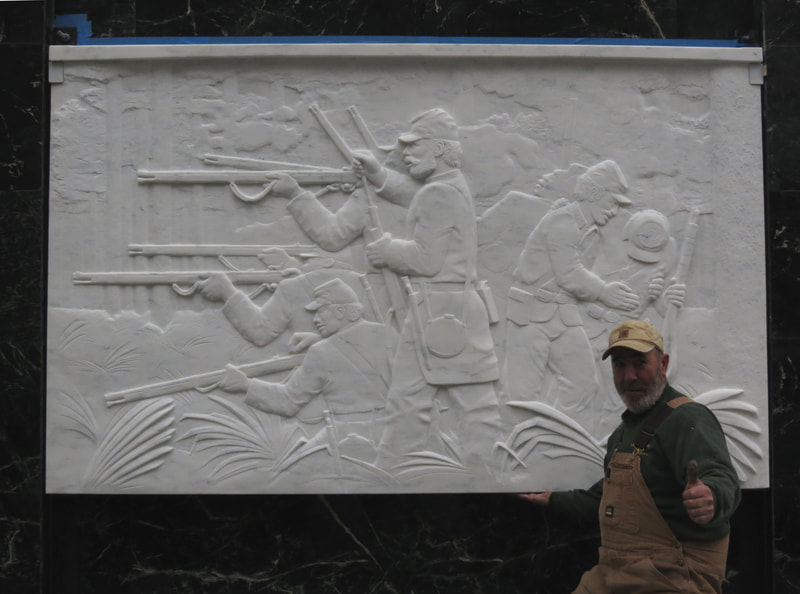 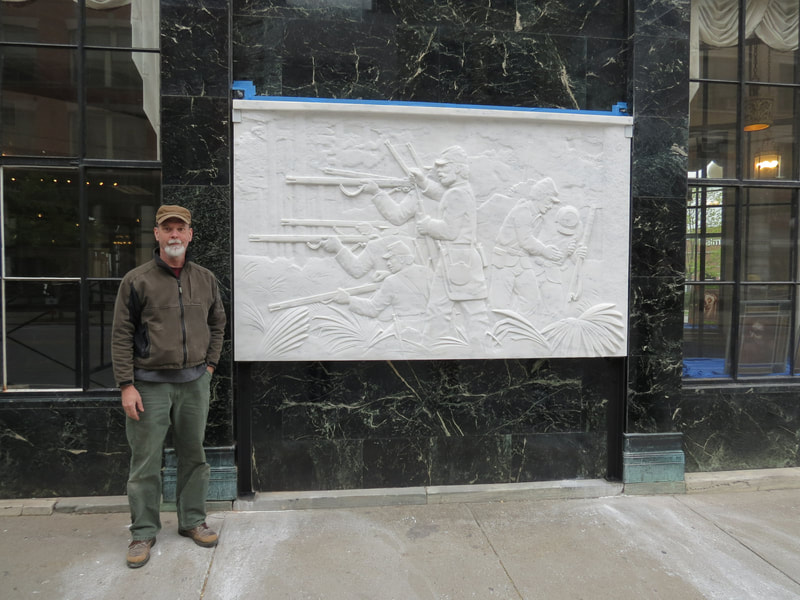 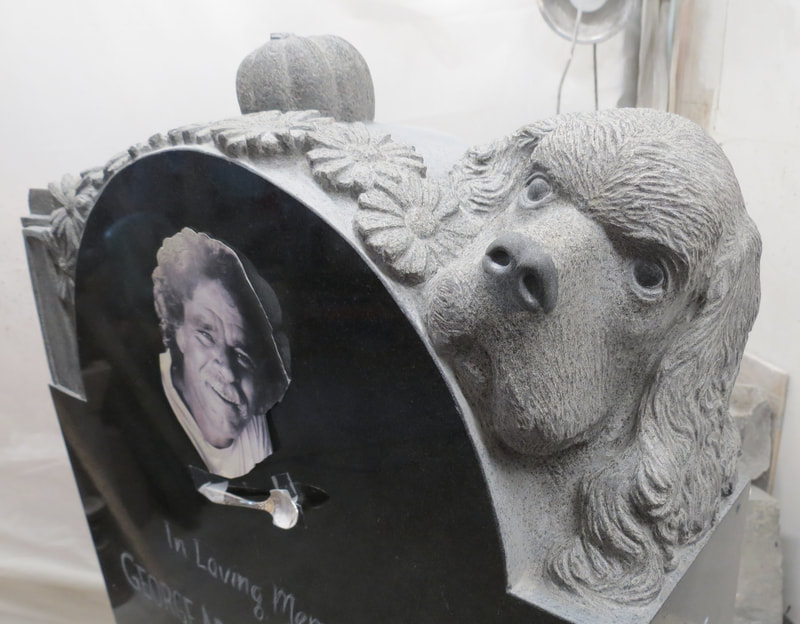 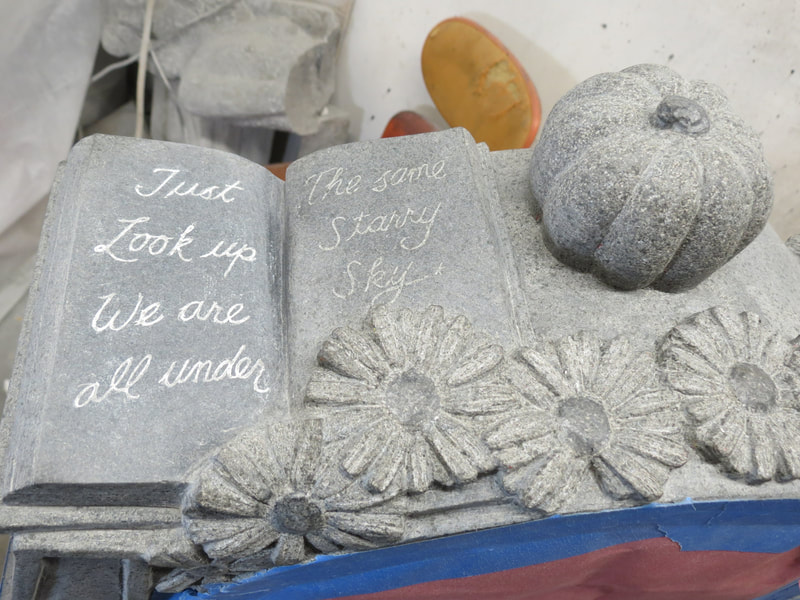 And then a summer goes by and it's October 2018.  Since my last update, I've been fully consumed by a large commission for the City of Rutland's Marble Trail Project.  Not actually in my studio, but just up the street at the Carving Studio & Sculpture Center, to be more accessible to the PR involved for the project.  My sculpture is one in a series of marble sculptures commemorating historic figures from Rutland and nearby.  It's a monument to twenty African American men from Rutland and dozens from Vermont that fought in the 54th  Regiment, Massachusetts Volunteers in the Civil War.   The group funding the project specified a battle scene which I agreed to with some reluctance, since I don't want to glorify war.  But I have deep emotional respect for the sacrifices of service men and women, and these men were were quite literally fighting for the freedom of their people, and the survival of our nation, so I rest in that.  I started with many days of research, both online and the book   A Brave Black Regiment by Luis Emilio, who was an officer in the regiment, and the website battleofolustee.org. The battlefield in Florida is a historic site and their website has excellent documentation from first hand sources on both sides.  I made a  half scale drawing, then rough clay sketch which I cast in plaster, then expanded to a Marble relief that is 5'4" tall by 8'-7" wide.  It's going to be installed soon in downtown Rutland VT 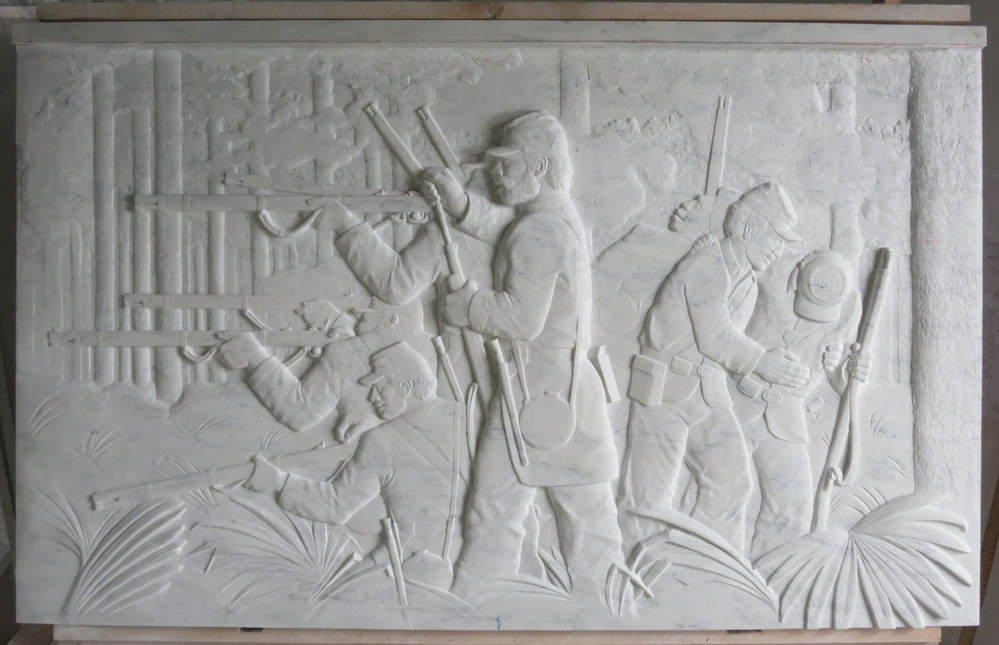 Time for a long overdue update, now in early April 2018. The Rutland County Vietnam Veterans Memorial was installed last November, and rededicated on Veteran's Day at the site on South Main St in Rutland VT. The winter was busier than usual, with various sculpture related repair jobs including new fingers, cast in white cement, for a very nice vintage religious statue.
Mid August 2017, and it's raining, so time for a quick update. I installed a marble clock in the West Rutland Library two weeks ago, designed in consultation with their board, and made from a vintage slab of West Rutland marble recovered from a historic building.  Now I'm fully engaged with a replacement sculpture for the Rutland County Viet Nam Veterans Memorial, commissioned by Chapter One (" First in the Nation") of Viet Nam Veterans of America. I did their existing monument almost 20 years ago, but it was a compromised block that had been begun by a veteran, and it's condition has already begun to deteriorate, so a new sculpture was decided on to preserve their legacy into the future
And then sometimes a year goes by between updates... now it's May 2017.  I finished the Zoë portrait this past winter and showed it in a February exhibition. Now I'm just getting ready to ship out eight Celtic crosses in marble, for the towers of a church in New Jersey.  Along the way there were pieces in black marble for another architectural repair/restoration, and some exterior studio renovations.  I finished the two clay models and had molds made, and hope to get to those waxes soon, along with several others. 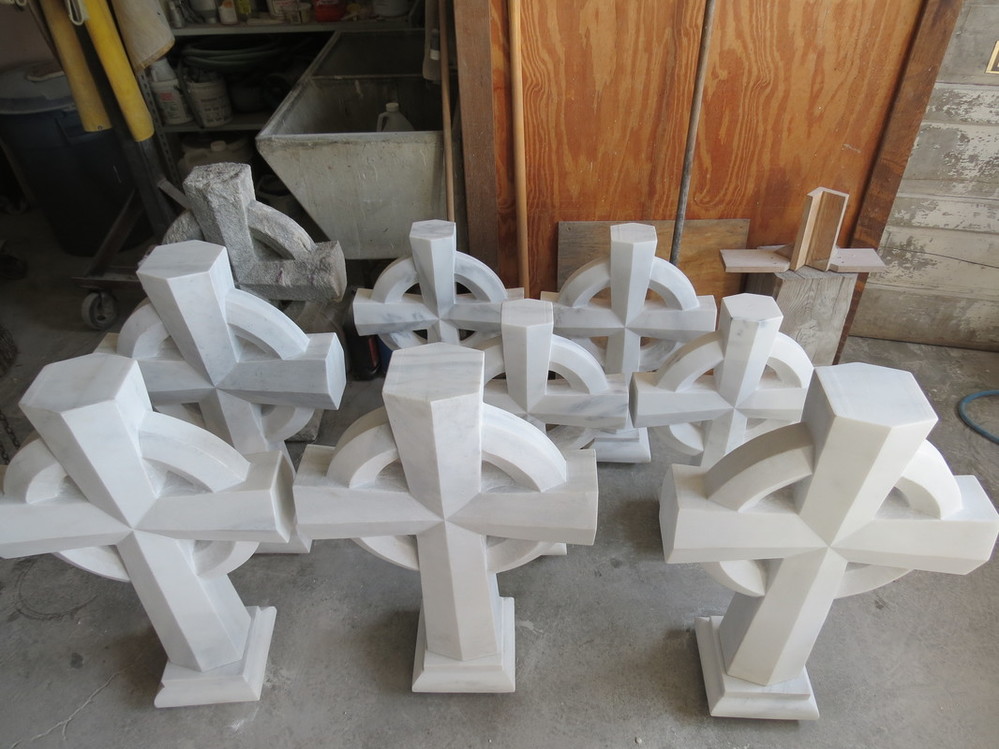 March 2016 brought the usual seasonal increase in small jobs and bigger ones that need quoting,
so the portrait is lagging behind, but also some progress on another new figure. 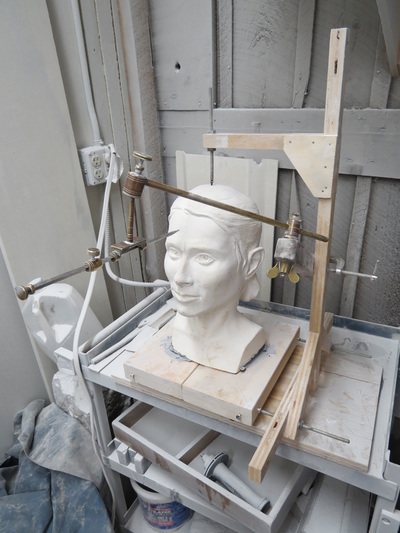 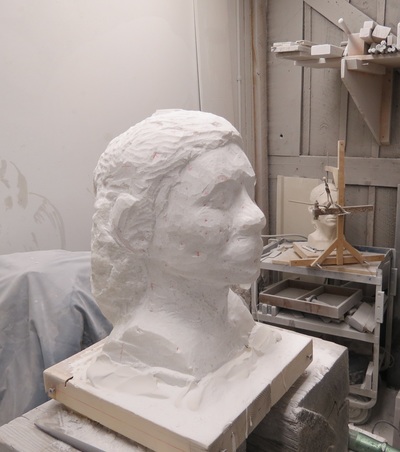 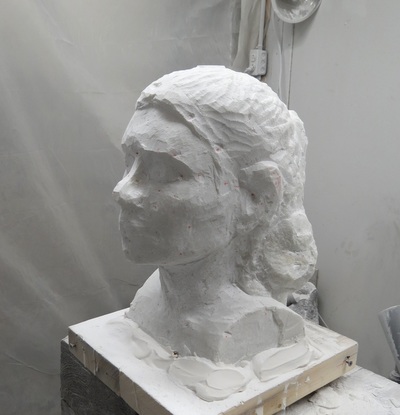 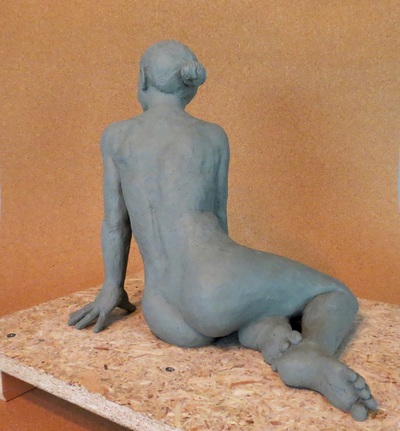 As March  2016 begins, the marble portrait of Zoë is finally set up for pointing, and I hope to get into it in earnest soon.
Zoë No. 7 is lacquered and painted, and I'm pondering a way of doing internal light without any artificial power source,
using natural light and a parabolic reflector under it. 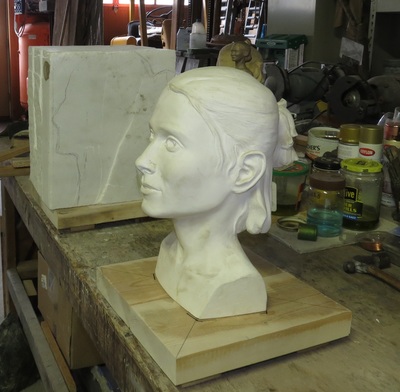 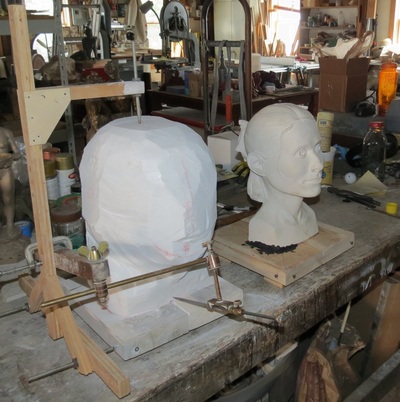 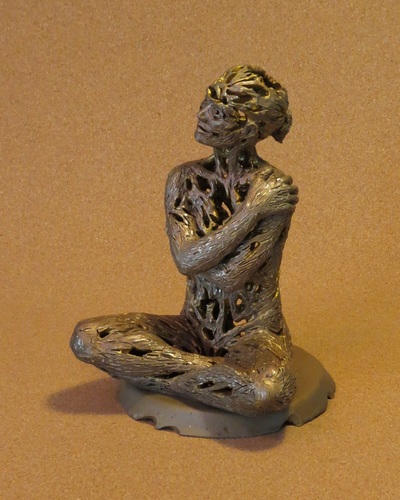 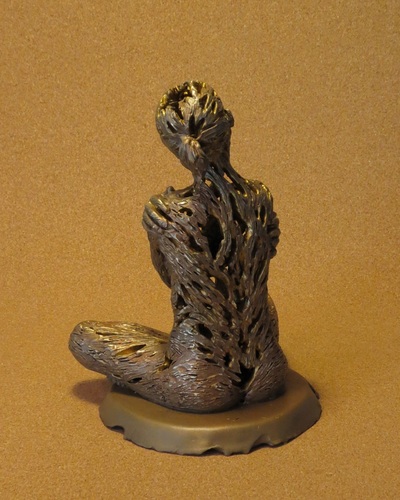 It's February 2016; Zoë No. 2b, which is a redo of a miscast Zoë No.2, is finished, as is Stephanie No. 1.
I'm still considering the finish on the other bronzes. The terra cotta base for AdamEve II, is dry, I'm looking for a kiln,
and there are a few new sculptures of a new model 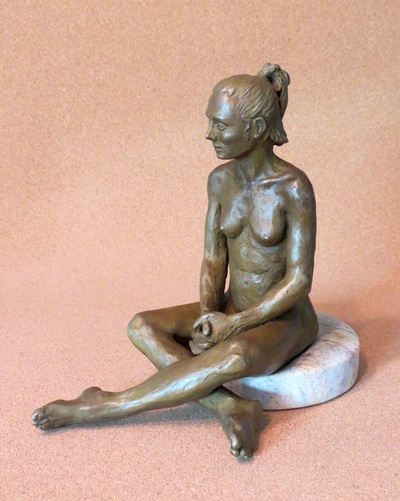 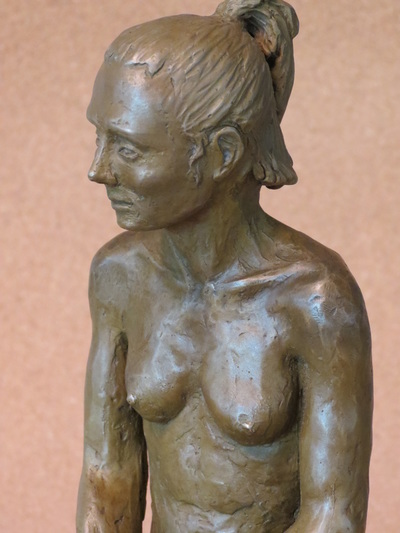 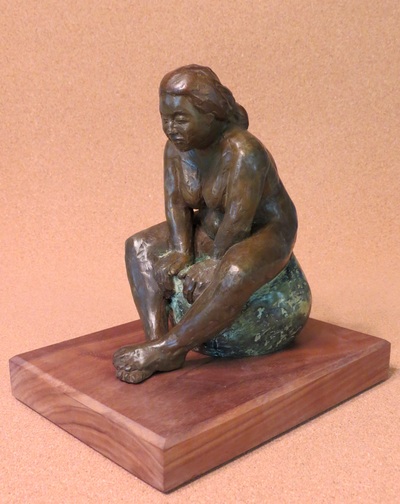 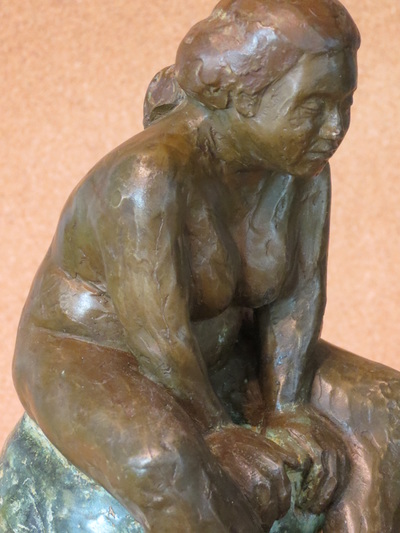 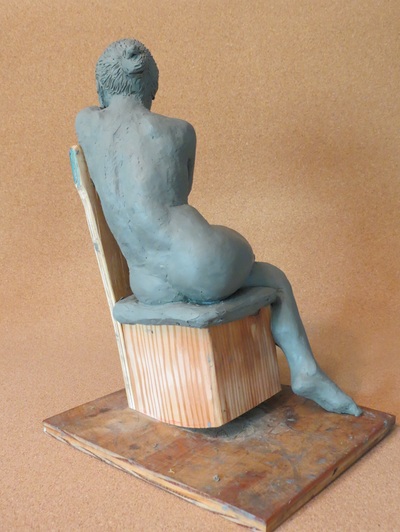 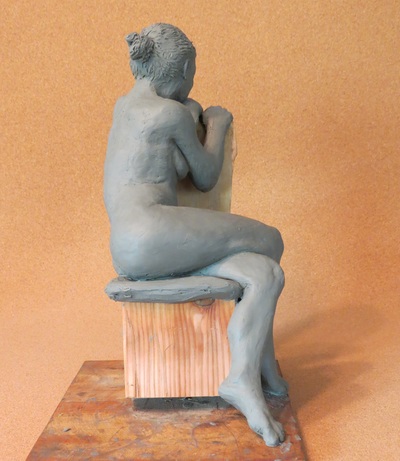 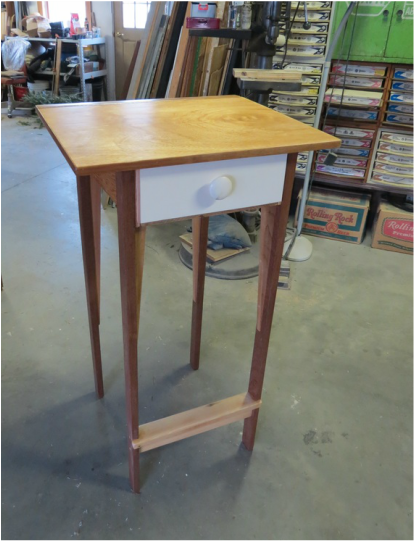 I made this stand-up desk for a friend, entirely from reclaimed materials; pine, maple, fir plywood, mahogany, cherry trim, and a leftover drawer
It's December 2015, and right now I'm working on pieces in the Zoë series; AdamEve II; and other small bronzes.
Next up is the marble portrait of Zoë
Proudly powered by Weebly